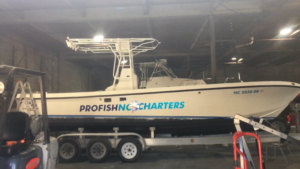 Our 30ft Sea Vee has become our primary fishing vessel as this boat provides a smooth and stable ride.  We are equipped with top-notch safety gear including a Viking Life-raft and two EPIRBs for your safety and comfort.   The Sea Vee has plenty of seating with forward bean bag seating for extra comfort.   The side walls and gunnels are tall so the any kiddos that are fishing will be have the rail at a higher level for stability.   Equipped with 29 rod holders and forward seating while you are fishing, this boat allows for you to easily fish while sitting down. 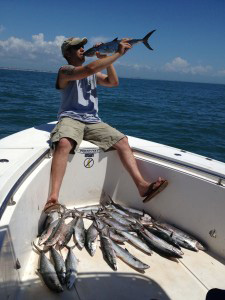 For inshore fishing, we charter a 20ft McKee Craft “Marathon Unsinkable” CC with a 2018 Yamaha 150  (Four Stroke) that will get you on the fishing grounds in no time! McKee Craft boats are made locally in North Carolina and are considered one of the most reputable and dependable NC Charter Boats ever produced. The Boat, named “No Bananaz” is from the McKee Craft’s “Unsinkable” line of boats and is uniquely designed to float under any and all unforeseen circumstances. This model McKee Craft is special because it excels in both Nearshore (within 20 miles from shore) and Inshore Fishing (Inlets, Creeks and Back-Water) unlike other North Carolina Charter Fishing Boats.

What our Fishing Charter Boat “No Bananaz” has to offer: 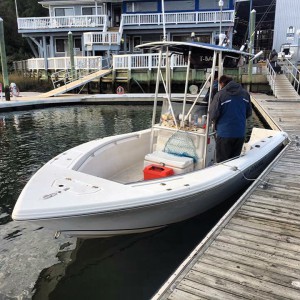 Why is there No Bananas on Boats?

– An explanation from Captain Trevor Smith:

“We get this question all the time and the answer goes back to to the first trade routes from the early merchant ships that brought goods and produce from the Tropics to the Americas and Europe.   The jungles that produce bananas also have many undesirable critters that inhabit them (spiders, snakes and rats just to name a few).  Well, when the bananas were harvested from the jungles and “crated”, the crates had openings so the bananas could “breathe” and not rot on the journey to their destination.  The problem with this is once collected and crated, the bananas were placed on the jungle floor until collection and stacking on the wooden merchant ships.  While the bananas were waiting for this transit, the various undesirable jungle critters would enter the crates where they were now “stow-aways”.    The crates of bananas were then transferred from the jungle floor to the awaiting ships where they were then transited to the Americas and Europe.  During this transit the “stow-away” snakes, spiders and critters left the crates and made their new home on the ship in the crew quarters and ballast of the boats where they bred and tormented the sailors for untold amounts of time until they were killed or escaped at port.   When this became a well known fact in the merchant sailing fleet, the captains collectively made a universal trade rule of absoultly No Bananas on boats. In honor of the old merchant sailor “law”, we do not allow bananas on our boats to this day. “

Our trip to Alaska is now published in Angler Maga